Processing…
Success! You're on the list.
Whoops! There was an error and we couldn't process your subscription. Please reload the page and try again.
Katie's Voice

The Women’s March in Champaign-Urbana

I went to the Women’s March—the Sister March in Champaign-Urbana, Illinois—on January 21, 2017. I don’t live there anymore, but it’s my hometown and I was visiting that weekend for my brother’s birthday. My husband dropped me and my sister at the park next to the high school I attended over 30 years ago, a time in America that I despised because I was a Democrat and the Reagan worship sickened me. Perhaps because I came of age during the 80s, or perhaps because my parents deliberately turned their backs on politics (complaining when my mother’s mother, who lived in D.C., wanted to argue), I wanted nothing to do with politics. I knew what I cared about: the environment, equality, peace. But I was an introvert who loved books and hated conflict. I didn’t march. I didn’t even read the news—because that was back when you could avoid the news, simply by not turning on the tv or picking up a newspaper.

But I went to this march because my sister said she wanted to go, and because it was in my safe, kind, hometown, a university town that always votes liberal though downstate Illinois is universally conservative. And I went because President Trump is to President Reagan as a radioactive flood is to a nuclear power plant. The flood is absolutely certain to damage everything it touches; the nuclear plant at least provides jobs and electricity, even though we’re going to be dealing with the waste for more years than we care to count.

When we arrived, it was sunny and 60 degrees—spring-like weather for central Illinois. My sister knew a few people and said hello. She sings with a women’s chorus in Champaign called Amasong, a chorus specifically for lesbians and feminists that we both first heard about when our mother joined, years ago. Our mother, who died nine years ago. Our mother, who had quietly come out in her 60s, and as quietly gone back in the closet for a couple of years before her death, when she decided she would not meet the love of her life and she was tired of dating. Our mother, who had wanted to be a doctor when she first started college, but had met our father and gotten engaged and majored in sociology, only going back to nursing school much later in a bid for independence from his money worries and anger. Our mother, who I so desperately wanted to talk to on November 9th, 2016, and for every day afterwards. 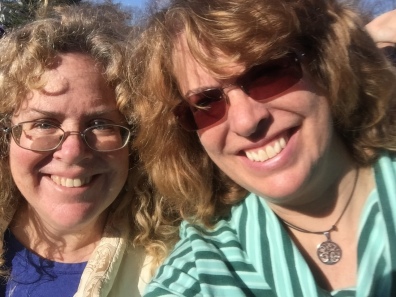 My sister and me (in the sunglasses) at the march.

My sister is not especially politically active, either. Oh, we both vote, of course, in every election. And my sister has been in a helping profession her entire life—now she works as a hospital chaplain, and runs Healing Horse Stables, a therapeutic equine center helping people with trauma and disabilities, that exists on a shoestring and because of a whole lot of unpaid work.

The organizers of the Champaign-Urbana event originally expected about 200 people to attend. In the end, there were well over 5,000 people there. I loved seeing the dogs people had brought, always kept on the outskirts so no one (including the dogs!) would be uncomfortable. We couldn’t hear the speakers and made our way towards the center of the crowd, but even there we had plenty of personal space. Everyone smiled at each other. Hope connected us, as beautiful and heady as the scent of hyacinths. The signs were clever and direct and specific and general. They called for solidarity, for recognition, for strength. Men and children were there, and for the first time in my experience, a man standing in front of us turned around and asked if we could see well enough. Not all the women who spoke were equally compelling; my favorite was a performance poem on the real meaning of “political correctness” (really it means “kindness and consideration”). I wish I could remember the exact wording that another used, but her idea rings as true as crystal in my head: “An empowered black woman is an empowered nation.”

Sometimes you know a sublime experience while you are having it. My sister and I soaked in the connection and solidarity as we soaked in the rare January sunshine. We knew our mother was with us, in our different but open ideas about where the dead exist. We felt not riled up but peaceful, renewed, knowing that this journey towards equality is long—it is, in fact, life-long, and what so many of us have devoted our lives to in marvelously diverse ways. If you marched, if you supported the marchers, you are one of us, a light. You don’t have to be perfect to be that light. We see you in the brightness we make together.