Processing…
Success! You're on the list.
Whoops! There was an error and we couldn't process your subscription. Please reload the page and try again.
Suzannah's Voice

An Ideal Husband? My May-December Romance 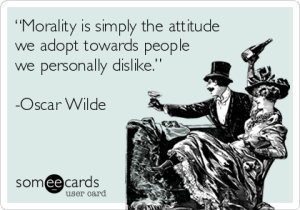 25 years older than me. But here I am.  I used to think of it as “sick” when I saw couples like us together.  I’m sure I said that word.  I’m sure there are those who’ve said it of us.  But it’s not sick; it’s a healthy relationship between two adults.

I’ll admit that when I was 15, I had a mad crush on a man who lived a few houses away.  He was tall and athletic, maybe in his late 20s.  He drove a red Datsun 280Z.  I’d walk up and down the street—even in the rain—while trying to compose lines of poetry in my head, and I always kept an eye on his house as I passed.  But I never would have gone on a date with him.  It wasn’t like that.  I was a kid and he was an adult.  That would have been sick.

There is the theory that women choose mates for their financial stability and men choose mates for their looks; if that is true, we both did well enough by those standards, but what we have between us can’t be explained that handily.  By the time my beloved and I got serious with each other, three of my four children were grown.  I’m an attorney with a great academic record and excellent skills in the courtroom; I didn’t need to be rescued by an older, wealthier man, and he could have dated women much better looking than I.  He still could. We just happened to fall in love.

A common thought among those who would judge us (as I’ve been told) is that I was looking for a daddy and found him, which is just so much bull.  My ex-husband, who was only 6 years older than I, acted like my daddy.  Good riddance.  My fiancé, who hates that frou-frou word, is an only child with no children.  I am a nurturer with an empty nest.  If anything, I am the mommy and he is my fifth child who is once again getting the attention he craves.  That suits us both—unless I get too smothering, which my children will all tell you happens from time to time.

When I first started seeing my fiancé, an older girlfriend said to me, “Yeah, older guys are great in bed.  They’re so desperate, they’ll do anything for you.” But that’s another misconception: that he is my sex slave (or that I am his).  The truth is, he knows more about sex than the younger men I’ve known, though I don’t know that I can attribute that to his age.  The bare fact may be that he is just a very thoughtful lover, as he is a very thoughtful person.  I have not once, ever, wished I’d had a younger sex partner in his place—and that’s without any help from the pharmaceutical profession.  But if the day comes when we do need that kind of help, we’ll know where to get it.  Commercials for those kinds of drugs dominate the network news we watch every night. We really don’t get the Cialis commercial: they’re in separate bathtubs holding hands. Just holding hands. Separately!

Of all the dirty looks we’ve gotten, most are from women older than I am.  They stare rudely and even make faces at us.  I think they are reacting to their pasts and projecting it on us. Maybe they’ve been dumped for younger women or think I displaced an older wife.

But when we get an ugly reaction like that, we get more lovey-dovey than we might have been.   In case they’re wondering whether we’re lovers, we make it clear that we are.  When one of us suddenly says, “Kiss me” to the other in public, we both know what’s up.  And if we are getting looks because they’ve figured out we’re lovers, we lay the love on thick and relish their growing surplus of disgust.  If they don’t like it and let us know it, we’re going to make sure they don’t like it even more.

Who are they to approve or disapprove of our relationship?  These judgmental fools might have remained stone-faced had they known their reactions would provoke the creation of our Society for the Protection of Trans-generational Love (SPTL), which we fondly refer to as “Spittle.” 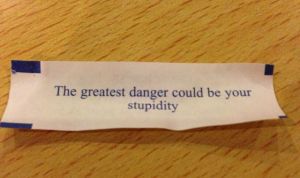 Bolder than the looks we get are the words.  One night, the woman at the Chinese restaurant where we used to get takeout asked if he was my father—while he was standing right there.  I kissed him on the mouth with much enthusiasm, turned to her, and said, “Yes.  I’m his favorite daughter!”

And just the other day before he was headed to surgery, his anesthesiologist tried to get a jab in.  He was asking medical questions and when he got to whether my fiancé ever stopped breathing at night, I said “yes” over my fiancé’s “no.”  The anesthesiologist asked him, “And this is your…”  I answered, “fiancée.”  He looked at me conspiratorially, gave half a wink and said, “Or daughter.” The nerve of a medical professional insulting the patient right in front of him, and expecting that I would get a little thrill from it.  “That’s not nice,” I said, looking him in the eye.

I’ve found that looking someone in the eye is fundamental when you want to make a powerful impression.  It’s more powerful than growing your grays out, which I did for several reasons, one of which was to appear to be a woman with life experience, a woman who knows what she’s doing and can make her own choices. 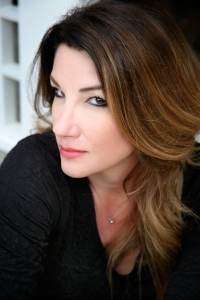 Yes, he had surgery—he had his gallbladder out, a common procedure for adults of all ages, even those in their 20s.  His health is excellent, overall.  He exercises every day.  He exercises more than I do.  His brain is quick, his wit is sharp, his attitude most days is as good as I can stand.  (Sometimes I like to sulk in my pajamas.)

But his breathing issue that I later learned was sleep apnea—a condition that is also unrelated to age—at first had me wondering whether he was dying, right there beside me in bed, and if not this time, would that be the way he would go some night.  I even wrote a poem about it.  It’s jarring, realizing in the dark that the person you love is not breathing.

This is my newer, more mature look.

There are two things I regret about our relationship.  One, because we met at a time when we were both mature (which made our age difference immaterial) it was too late for me to give him a child.  No one in the world who knows him would think he’d be anything other than an excellent father.  But he never got the chance.

And my second regret is that one of us is going to die first, leaving the other a life with a big hole in it.  That became more real for me during the sleep apneas scares, when the rest of my life suddenly seemed uncertain.

But the statement “One of us is going to die first” is true for every couple who stays together.

Besides the negative people, there are the ones who cheer us on.  And I’m not talking about the well-balanced people such as our close friends and family who see that we’re good together.

They are strangers, usually, or acquaintances.  Men who leer and silently cheer my man for tagging a younger broad.  Older men who talk to me as though I might have a thing for them, waiting to see a sparkle in my eye.  We met a poet in Ireland (whose name does not rhyme with “famous”) whose company was enjoyable otherwise, but he acted as though because I have a thing for my man, I would have a thing for him, that because he and my fiance are roughly the same age, my love was transferrable to him.  “I love Billy,” I said, looking him straight in the eye.  “I don’t love older men.”

Yes, I love Billy.  And Billy loves me.  Though there’s really no such thing as an ideal husband, I do believe he’s as ideal for me as someone my own age could be.  It boils down to this:  what matters is that we have true companionship.  A thread of something that may be unknowable or unnamable binds us together.  We are compatible despite our differences in age, upbringing, family experiences, and the lives we led.  (We are both intensely stubborn; we have that in common.  I’m not saying we always get along perfectly.)  But beyond our shared sense that we belong together our love can’t be explained.

Or, as Billy succinctly put it: “If a matchmaker had put us together, I wouldn’t have gone for it.  I would have had him shot.”

Five years after writing this, Suzannah Gilman takes another look at her relationship with a much-older man.  You can read it here: My May-December Romance, a Dozen Years In.