Follow The Gloria Sirens on WordPress.com
Join 55,424 other followers

A Writer and Her Dog: The Story of Chili

Fiction writer Nancy Welch tells the compelling tale of how her beloved, problematic rescue pup Chili romped into her heart. First published in a recent special feature of Ploughshares online called “Writers and Their Pets.”  Enjoy! 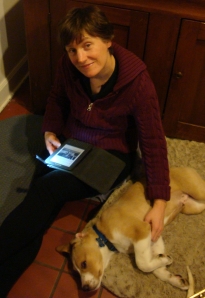 For years I cruised the websites of shelters and rescues. Established and well-trained. Mannerly. Mature. Such were the dogs, staid companions, their elderly owners bound for assisted living, I tried to tempt my husband into meeting.

His answer never varied, not in fifteen years. So why did I persist? For the same reason children press for ponies or mini-bikes few are likely to receive. Each time I tried to initiate a “What about this one?” conversation, I experienced the thrill of longing, my SEEKING system (as animal-welfare advocate Temple Grandin might put it) pleasurably engaged. When I asked him to look at a flop-eared pup with enormous paws, I expected him to snort. I thought he might alter his answer: “You’ve got to be kidding.” Instead, lingering over the website photo, he said, “Maybe …”

“He looked at me with puppy eyes,” my husband says, helplessly, when friends ask what changed such a made-up mind. He omits, or perhaps can no longer remember, the shelter volunteer who tsked at the puppy’s ceaseless shrieks. “If you take him, you’ll have to make him stop that,” the volunteer warned. His tone suggested that he did not believe this possible, that Chili—the last of his litter, born in the back of an Animal Control truck—was beyond rehabilitation.

Would I have left Chili at the shelter if I had known what was ahead? Our friends, our family ask that too. There is so much we did not know. We did not know that outsized paws meant this eleven-pound pup would become an eighty-pound dog. We were previously unacquainted with the phrases “bite threshold” and “bite inhibition,” both noted by the shelter as among Chili’s possible problems. And we could not have known—or had not wanted to anticipate—that shortly after Chili moved into our home, my husband’s long illness, briefly dormant, would stage an aggressive return. If we had known, we would never have adopted any dog, let alone a puppy with issues. Yet when I think about that version of the story—the version in which I continue my search for a middle-aged, mellowed-out dog my husband would never say yes to; the version in which I can do nothing but bear witness to his mounting symptoms and expanding gloom—I’m not sure we would have survived.

When it came to this troubled pup, there was a great deal to do. The first time at the vet, Chili’s head-whipping frenzy was so great, the vet stepped back and cried, “What happened to him?” Two weeks later, back for his boosters, he was all tail-wags and ear-licks. What happened in between was this: He took all his meals, one hand-fed tidbit at a time, standing on our kitchen’s stainless-steel table, the same sort of table that in the vet’s office had spun him into screaming panic. Back at the vet’s, Chili hopped up on the table and nosed my hand for treats. The vet gave him an approving pat. “What a good boy,” he said. “First time we’ve seen him?”

Of course, as often happens with a story like this, it was Chili who rescued us. Through that first winter, my husband slept, for twelve, even sixteen hours at a stretch, relief from the pressure of the tumors in his brain. In other circumstances, I would have sat terrified vigil beside him. Instead, I was sleeping in my clothes, winter parka hanging on the back doorknob, listening—every two hours, every night—for Chili’s whine. Every morning I stepped into my skis and snapped on his leash. Flying along a snowy trail, Chili running just ahead, I felt the surprise of joy. As a hard winter passed into harder spring, swelling tumors roadblocked the paths in my husband’s brain, those that could connect him to words, concepts, even fundamental feelings: kindness, affection. But at the sight of Chili—rolling over for a legs-up belly scratch; later, beamed by dear friends into hospital rooms via video and Skype—his face lit with love. For a time, mercifully brief, when my husband could not remember why we had married, what life we had shared, our eighty-pound dog’s shoulders were there for me to cry on.

I am not saying Chili went from basket-case to therapy dog in two easy lessons. In our front closet hangs the coat he shredded—while I was wearing it—during his dreadful adolescence. Plenty of times we have worried that Chili is indeed a dog beyond redemption. But many more times we have been amazed by his capacity for change. The puppy who knocked food bowls from my hands has learned to sit and wait for “Chili, okay!” When we took him, distressed by an infected toenail, to the vet’s, he offered up his paw. “He’s a gentle giant,” the vet reassured a wary tech.

Chili, now nearing a year and a half, does not show signs of growing into the dog I once searched for: staid, mature. (His latest game is “bed surfing”—leaping aboard the bed, sending it sailing across the room.) He has grown, instead, into something so much better—always affable; mostly mannerly. He is also, with my husband, testament to the remarkable rehabilitative powers of the brain. Six months after his last surgery, my husband negotiated three flights to be reunited with his overseas family—the first visit he has been able to make in several years. From his sister’s, he called, and through the long-distance line I could hear, could feel his joy.

See the original post and more stories of writers and their pets here.

Nancy Welch’s stories have recently appeared in Prairie Schooner and the Fall 2013 issue of Ploughshares. Author of the story collection The Road from Prosperity, she lives in Vermont with her husband, dog, and cat.