Processing…
Success! You're on the list.
Whoops! There was an error and we couldn't process your subscription. Please reload the page and try again.
Suzannah's Voice

PRIDE: From Our House to Yours

I, however, was brought up in a family who were strangers to irony.

In fact, the other day when I said that to my mother, she said, “Um… well, you can you tell me what irony is? What does that mean?”

When I was a child, my grandmother got long, Xeroxed, pride-filled Christmas letters from a distant relative, the most hyperbolic rundowns of a rather ordinary middle-class family’s year than most people can imagine. Perhaps my grandmother and I were the only ones who read those letters with awe, ooh-ing and aah-ing over such grand exploits as her fifth cousin driving a golf cart in a small-town parade. We were much below middle class, and we were darn proud of being related to such accomplished people! 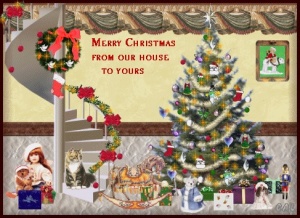 me (my husband had a decent full-time job, he was going to college, we were involved in our children’s school and extracurricular lives, we owned our house and had vehicles that were not in danger of breaking down), I started writing Christmas letters. I admit here that I violated the first rule of Christmas letter writing (don’t brag or overstate), but I would like to say in my defense that I followed some of the other rules (remember your audience, use your own voice, start out on a high note, end with a good wish for the new year), and I tried to be funny. I said tried. I would quote some of my letters here (because I saved them all, along with the family photographs I would send with the letters), but I don’t want to embarrass myself.

The trouble with writing these prideful Christmas letters is that people make fun of you behind your back, they start to hate you, and some even become jealous of you, which is the saddest of all. Hardly anyone has the reaction I had as a child: “They have two cars, one is brand new, and I’m related to them!”

A former friend of mine (which has nothing to do with my Christmas letters; I just couldn’t take her Debbie Downer personality) once remarked that I never put anything negative in my Christmas letters. I didn’t complain about my husband or children. “Well, who wants to read that?” I said. Plus, I considered it a cardinal sin to adopt any attitude about my children other than love and gratitude.

I got a complaint-laden Christmas letter from a former neighbor in which she recounted what a selfish jerk her ex-husband was (they were married when they were our neighbors), how he didn’t pay child support and was shacking up with some woman, how she and her children suffered, etc. I didn’t want to read that, for sure. (The next time I saw her, I agreed with her that he was no good, and I told her I was glad she was rid of him. When they got back together and remarried, she stopped talking to me!)

Though I thought writing Christmas letters was a shameless exercise in overstatement and amplification, there was something much deeper underlying my letters. In them, I portrayed my family as the completely happy, totally functional family that I was trying to make true in my life. I’d had a childhood bereft of many of the things that count, and I was trying to give my children the opposite. My boastful letters were my way of recording that progress, and I wrote them the best I could without fictionalizing, though I did commit lies of omission.

My last Christmas letter was written a few years ago. After my daughter read it, she wrote a spoof Christmas letter, and when she read that to her brothers they laughed and laughed. I realized that my own children, who once thought the letters were special, realized that they were ridiculous while I, who should have long since outgrown the need to write them as a way of making myself feel better about my life, was still taking them seriously.

I wouldn’t quote my own Christmas letter, but I will quote Laureli’s. She obviously picked up on the habit I had of putting a positive spin on everything imaginable.

We have had some joyful news this year. Laureli recently gave birth to her first daughter, Isabelle Plath. We are all in the dark as to whom the father may be. It’s one of seven boys at her high school, two of whom are football players. She’s a popular girl. She is working hard at school to keep up her 2.5 GPA in the hopes of someday becoming the manager at the McDonalds where she works!

Chuckie is holding on to his job as a pizza delivery driver despite his alcoholism. It is difficult to quit, of course, but even harder since his two younger brothers will not cease throwing parties. He uses his tips from deliveries to supply the booze for the parties, the rest is spent on the hookers, and in return his brothers don’t rat him out. I can’t help but feel proud of them, and what mother wouldn’t, when they work together so well?!

It’s painful thinking back on the letters I wrote and remembering who all I sent them to year after year, even though there were many people who told me they looked forward to my letters. Either they were holding “Most Awful Christmas Letter” contests and already had bets on how bad mine would be, or they had really thick skin and cared about my family. I finally wised up, but I paraded my ignorance in front of everyone year after year. I feel now kind of the way it feels when you dream you’re naked and everyone else had the good sense to show up wearing clothes.

At least my kids won’t be writing Christmas letters when they start having children. I have that to offer the world– from our house to yours.