“Help me,” kidnapping victim Amanda Berry told a 911 operator on her way to escaping captivity in Cleveland.  “I’ve been kidnapped and I’ve been missing for ten years and I’m, I’m here…”

Here, there and everywhere.  The 2013 Cleveland kidnapping joins a long and heartbreaking list.  “Shed Girl,” “Incest Girl,” Elizabeth Smart; sadly, the  parade of female victims goes on and on.  This past year, I wrote a one-act called Stolen Girl Song.  It was performed in 2013 in Maine and Massachusetts.  In it, I try to touch on the international scope of this problem.  Recently the play’s director emailed me a link to a new story from the Irish Times about an Irish woman discovered “enslaved” with other women in London.  He titled his email, “it never seems to end.”

The bizarre proliferation of stories of women being “held” hit close to my own home back in 2001.  In my quiet neighborhood in Arlington, MA, in the Arlington Advocate, a shocking story emerged.

Two women had been “held” as unpaid servants in the home of a wealthy family who allegedly controlled the womens’ visas– right down the street from my family’s house. That news story became the basis of my novel GIRL HELD IN HOME (New Rivers Press, 2011).

In real life, my neighbors and I had no clue there were women being held in the “strange house by the lake.”  But we did have clues that something was amiss– though not such dramatic clues as the naked leashed women allegedly spotted by some neighbors to the Cleveland home in question.

In 2001, boys who lived in the home where women were held in Arlington “trick or treated” our neighborhood dressed as, in their own words, “a terrorist and a dead American.”  These boys rode “suicide skateboards” right out onto the busy Mystic Valley Parkway.  The house these boys lived in faced the Mystic Lake.  An expensive piece of property, yet the house itself was rundown in 2001.  Graffiti appeared on the closed garage doors in an unreadable–or unreadable to us–language.

Once, a bilingual neighbor ventured down the hill and across Mystic Valley Parkway to visit their house.  She brought back reports of a close-mouthed family claiming to be related to Saudi royalty.  But she caught no glimpse of the women the Arlington Advocate later reported were held in that home. Maybe they were among the robed women who sometimes appeared in the overgrown front lawn of the house, drying clothing on the lush bushes.

The lakefront property has been bought by a new owner now, the house torn down and rebuilt. Kindly, knowing about my novel, this new owner let me tour the old house–in complete decline after the family living there fled and the women allegedly held there were taken into Immigration custody.  The house stood empty for years.

When I toured it, the air was rancid with rodent droppings and rot.  The once-shiny tiled floor was shattered.  The upstairs room where allegedly the servants lived was like a giant cedar-lined windowless closet, blank-walled, telling no tales.

On our street, we had invented our own misguided tales—involving, in our post-9/11 panic, international terrorism—for what might be going on behind the shaded windows in that house.  After my novel was published in 2011, I noticed that new stories of women being “held” kept popping up in the news.  Triggering more stories inside my mind.

On Dec. 20th, a new one-act play of mine called STOLEN GIRL SONG was

performed at Richard Cambridge’s Poet’s Theater at the Armory Arts Center near my home in MA.  The play had premiered months before at the 2013 Northern Writes New Plays Festival in Maine.  In the talk-back at Northern Writes, audience members discussed the role the audience plays in these cycles of sordid stories.

Cleveland’s Ariel Castro became a household word overnight. Even in his prison-cell death, he is still in the news.  The neighbor man who bravely rescued the girls and became a media sensation has apparently just signed a book deal. The grotesque details of girls literally held captive in chains “hold” us in horrified fascination.  While I try in my novel and play to get inside the heads of the girls involved, I am outside as well: writing about stories I could not stop reading and thinking about.  Trying to wrap my writerly head around the unfathomable facts.

It is wonderful as well as horrible when stories like Amanda Berry’s come to light.  Light needs to be shone into the dark homes and basements where women are held.  But when that light becomes a spotlight, and when the stories become tabloid fodder, what does that do to the most disturbed minds among the millions “held” by these unimaginably evil acts.

Unimaginable, yes, but imagine them we do, over and over.  When the next Stolen Girl story breaks, will it be in a house near our own?  How many of us will be among the millions of long-distance onlookers, watching?

Elizabeth Searle is a novelist, playwright, and librettist. Read more about her work here: elizabethsearle.net 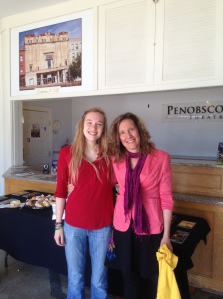 Searle with actress Emma Howard at the Northern Writers New Play Festival in Maine in May, 2013; Emma played the lead in Stolen Girl Song, directed by Bruce Pratt.