It’s strange how hair is a body part—it’s yours and it isn’t. It belongs as much to you as your height, your hands, your nose. It binds you to the ancestors who gave you the DNA, but when you cut it, you don’t bleed. They say you can’t tickle yourself, but hey, your hair can. It tickles your ears, your brow and cheek, your bare arms and shoulders. To whom does your hair really belong? 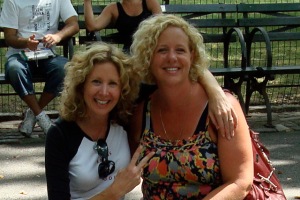 My sister and I rockin’ Dad’s curly gene.

I’ve got the dominant gene for curls. Got it from my father. I grew up hearing myself compared to him and to Shirley Temple, which explains why I’ve always felt like a middle-aged man trapped in a little girl’s body.

In high school I tried the trends, the Farrah Fawcett, the Dorothy Hamill, but my hair refused to feather, and that battle took such an emotional toll that I vowed never to ask it to do anything it didn’t want to do ever again. Eventually I was mature enough to realize it was best to stop trying to tame it with a hairbrush and just let it have its way with me. 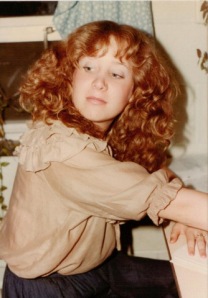 When I got to college, I decided to grow it long. They say the shortest distance between two points is a straight line, so it took about fifteen years for my hair to cross the milestone of my bra strap. Short, it was curly; long, it was dense, wavy, and wider than my shoulders. It hid me. Essentially, I’d grown my own burka. But I liked to think it said, “I’m a wild, rock-n-roll, au naturel, Lady Godiva, hippie-chick, Jersey-girl.”

People exclaimed, “My God, you got a lotta hair!”

Eventually, there was so much of it, it achieved sentience. It belonged to itself. It went crazy. When I took it out in public, I had to keep it leashed like a pack of ferrets, bound in rubberbands, barrettes, and braids. Once, while I was standing at a bank teller’s window, I turned my head, and my hair stole a pen right out of some guy’s hand.

My hair liked water. I had to be careful bending down to pick up stuff in the bathroom, or my hair splashed playfully in the toilet like a toddler.

Same thing with spaghetti sauce. My hair was passionate, artistic, Rubenesque, and loved dabbing a little spaghetti sauce on the end of a lock and painting designs on the tablecloth, my sleeve, the silk blouse of the person beside me.

My hair got reclusive. It liked to stay home. I’d get in the car and slam the door, thinking my hair had gotten in with me too, but no. My hair was outside the car panicking, pulling on my head, threatening to break my neck if I didn’t open the door, get out slowly, and step away from the car. 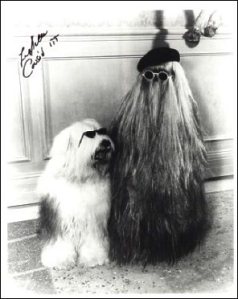 Where does my hair end and where do I begin? It’s like having a pet.

People asked me if it was a lot of trouble to take care of, and I’d say no, I let my hair do its thing, and it lets me do mine.

But that wasn’t true. My hair was possessive. It never liked my men. It tangled with their fingers, pens, keys, tv remotes, and barbecue tongs. It’d swipe a buffalo wing right off their plates. Sometimes it’d slip some of itself into a casserole I’d cooked for a date, and there was no denying where that came from. He’d gag and pull out a long, single Slinky strand. If a man couldn’t take the hint that my hair was sabotaging the relationship, it all came clear when he made a move, and I yelled, “Ow! Ow! Ow! Get off my hair!”

One day I got thinking it’d be fun to be free of it. I could be liberated by sassy Jenna Elfman hair. I announced, “I’m thinking of going short, donating some of this rat’s nest to Locks for Love.”

And people freaked out. They said, “You can’t cut your hair!”

Can’t. As in, they forbade it? As in, cutting it would be wrong? As if cutting down this massive oak tree of hair would threaten the property values in the neighborhood? What were they going to do about it—chain themselves to my head? Who did these people think they were that they had a right to tell me what I could and couldn’t do with my own hair? It pissed me off.

I shouldn’t have been surprised. When you think about it, you’re the one person who can’t see your hair. It’s part of the décor of everybody else’s lives. People liked looking at my long hair. They were used to it. Think about it—they’d all grown attached to it. 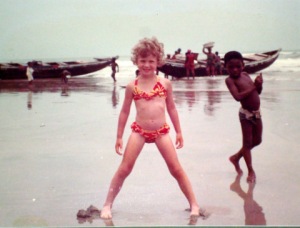 A Ghanaian child studies this strange cross between a middle-aged man and Shirley Temple.

And all my life, even on the other side of the world, people have assumed they had the right to my hair. When I was a little girl, my family moved to Accra, Ghana. Back in the sixties, few Ghanaians had seen a head of hair like mine, and everywhere we went, hands reached out and touched my soft, fair curls to see what it felt like.

Back in the States, girls treated me like an animated baby doll whose hair they could brush and style. When I went for a hair trim, the hairdressers kept me trapped in the chair so they take turns practicing the latest braids. They’d turn me loose hours later, dazed and stumbling, my scalp throbbing.

It boinks and it votes.

People would ask me, “Does it boink?” which nowadays, is a little strange, like asking, “Is it sexually active, and if so, does it wear protection?” But before I could answer, they’d just reach out, grab a curl, pull it down straight, and let it go. And yeah, my hair boinks.

I was wrong about the Jenna Elfman hairdo. It hasn’t changed a thing. Even though there’s less of it, my hair still has its own thing going on. Recently, my Rocky Horror hair developed new boundary problems. It seduced my friend Suzannah. Even as she reaches for my head, she says, “I can’t stop myself. It’s like how strangers feel entitled to touch pregnant women on the belly. It’s just so wrong.” But a pregnant woman is bringing a separate individual to the community. She is not the child, she is “with child.” And, I suppose, I’m “with hair.” I’m having curls.

And apparently those curls are still singing, “Thrill me, chill me, fulfill me.”

Don’t try to tame it with a brush. Just let it have its way with me.

Always careful not to touch me on the scalp, which is where my hair ends and I begin, Suzannah plunges in with both hands, slides the curls through her fingers, pulls them straight and lets them bounce back, and the two of them, Suzannah and my hair, disappear somewhere alone together.

And I tag along, loving it.